On Tuesday 8th November, seven girls and six boys from Headington and Radley’s Sixth Form took part in an evening of collaborative cooking and dining in Headington’s new Food and Nutrition Centre.

The evening begun with a general introduction and a quick lesson on the six-course culinary masterpiece they were soon to create. The larger group was then split into six smaller groups with each group being given one of the six courses to create. Fantastic, delicious and inventive dishes such as quail’s eggs croustades, palmiers and duck rolls.

The budding chefs then took to the dining table where they were able to enjoy their creations.

Miss Hannah Leigh, Pastoral Director of Sixth Form said: “The girls had a fantastic time working collaboratively in creating the challenging menu set by Mrs Lou-May from Headington and Mr Barlass from Radley. I would like to add that they would not have had such a good time without such enthusiastic mentors!

“The evening was full of fun and laughter and was fantastic in creating what we hope will become lasting friendships between both the boys and girls, but also the schools.

“We are so looking forward to having the next group of gastronomic apprentices from both schools in the near future!” 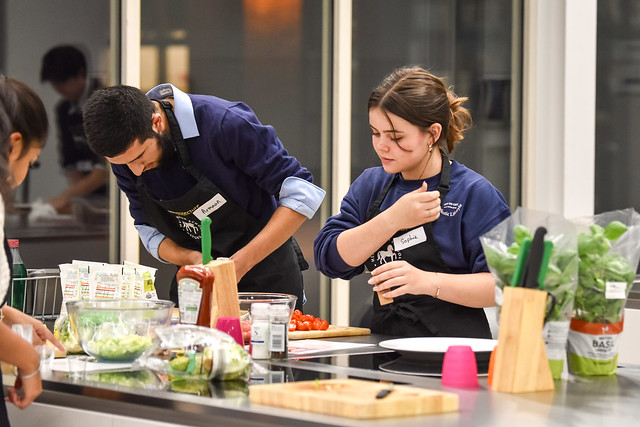