The American Concert was the perfect antidote to the cold November weather.

Its impressive programme promised much and delivered even more, with the Prep and Senior schools coming together in celebration of the rich transatlantic repertoire, delighting us both with the big names of Gershwin, Joplin, Ellington, Bernstein, while also introducing less well-known works by Santamaria and Anderson.

Superb musicianship and boundless enthusiasm defined all the performers, from all year groups, who played to a packed school hall.

The Chamber Choir opened the evening with the iconic ‘America’ from West Side Story – a fitting tribute piece. This was mirrored in the second half, which also opened with ‘America’, this time Simon and Garfunkel’s more soulful folk rock exploration, beautifully delivered by the Headingtones under Mr Anderson’s direction.

Soul Train then gave us another taste of the 1960s with its exquisite rendering of ‘California Dreaming’ and its unforgettable flute solo.

The Prep School Chamber Choir, meanwhile, was resolutely contemporary, holding absolutely nothing back in its spirited version of Katy Perry’s magnificent ‘Roar’, true to its brief to outdo even the lion in volume.

The programme ranged effortlessly across diverse musical styles, showcasing the breathtaking skill of the seemingly limitless range of ensembles we are so fortunate to have at Headington, ensuring that there was something for everybody on offer.

From the light pizzicato charms of Leroy Anderson’s  ‘Plink, Plank, Plunk!’, which the Stringendo ensemble smilingly plucked its way through, to Quincy Jones’ stunning ‘Bossa Nova’, to the String Orchestra’s ‘Mambo’, which excited just the right degree of audience participation, the musicians raised the roof.

There was plenty on offer to satisfy the musical appetites of the film enthusiasts in the audience, including the Brass Ensemble’s magical performance of the Harry Potter theme, Stringendo’s ‘La La Land’ medley and the Guitar Ensemble’s utterly charming arrangement of that Disney classic ‘Under the Sea’.

There was even something for those impatiently waiting for the festive season to begin, thanks to the Brass Ensemble’s ‘Winter Wonderland’ and the Sinfonietta’s ‘Rudolf’.

The evening ended on a bang, with Mr Penman leading the Symphony Orchestra through Brubaker’s tour de force, ‘What’s Up at the Symphony?’ aka Bugs Bunny’s Greatest Hits, with irrepressible energy, an exuberant journey through European music in which Wagner, Liszt and Rossini meet Looney Tunes.

Deputy Head Dr Anne-Marie Stanton-Ife said: “I would like to congratulate those who took part, individually and collectively, without whose commitment and professionalism a concert of this ambition would not have been possible.

“As Director of Performing Arts Mrs Aimee Jamison said as the evening drew to a close, music at Headington truly exemplifies the collaborative spirit of the school. Without this collaboration, one of our cherished ‘Six Cs’, there would be no ensembles, choirs or orchestras, and certainly no concerts. Mrs Jamison and the Music Department, once again, deserve our thanks and gratitude for pulling off yet another triumphant evening.” 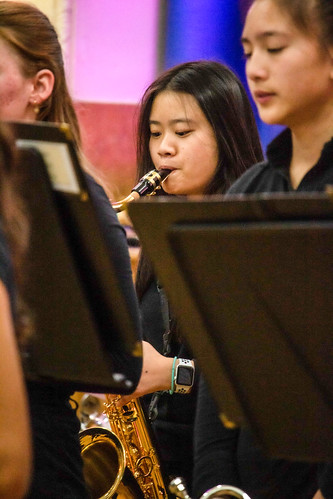