There were hugs and smiles of joy as girls celebrated the rewards of hard work as they picked up their A Level results.

Girls were sent their results electronically but many joined teachers and friends in school to mark the occasion. It was the first time since 2019 that results were awarded based on public examinations rather than teacher assessed grades.

Despite significant disruption to their studies during the pandemic, girls recorded excellent results, reflecting the hard work they put in both in the classroom and at home.

In total, 71.6 per cent of all grades awarded were A*-A, with 36.7 per cent receiving the top grade. Of the 84 girls sitting exams this year, 84 per cent secured their first choice offer and 70 per cent are headed to Russell Group universities, with 8 per cent taking up places at overseas universities. 17 girls – one in five of the cohort – achieved three or more A*s.

Among those celebrating was Katerina, whose three A*s and an A secured her a place at Trinity College, Oxford, to study Classics.

She said: “I feel completely overwhelmed. You have this fear you’ve done something stupid but it’s all worked out and I’m really proud of myself.”

Katerina joined Headington in Reception, her results marking the end of 14 years at the School.

She said: “Headington has served me so well and it will always be a part of my life because I’ve had such a good time here.

“I don’t think I could have done it without everyone, all the teachers, all the support I’ve had and all the friends I have made.”

Hannah is headed to Pembroke College, Cambridge, to study Computer Science after receiving 4 A*s and an A in her EPQ. She joined the School in Year 5.

Head Girl Beatrice Rich was delighted with three A*s and an A in her EPQ. She plans to take a gap year working in a school before reapplying for Durham and Oxbridge next year.

She said: “I’m so shocked, I can’t quite believe it.

“There has been so much support all the way through and I feel very lucky to have been able to have help every step of the way.”

It was a particularly anxious experience for this cohort, for whom it was the first time sitting public examinations.

Abi, who is headed to Warwick to study Economics after achieving 3 A*s and an A, has been at Headington since Nursery and is one of four girls completing their A Levels who have parents who work in the Prep School.

She said: “It feels strange that we won’t becoming back next year but it’s still quite exciting.

“These results feel different to GCSEs which felt as if they were mine but they weren’t mine – while these feel like they’re mine so it was more stressful but I am also more proud.”

There were some stellar results in various subjects, with 100 per cent of candidates in Computer Science, Dance (Headington’s first A Level cohort), French and Latin achieving A*-A. In addition, an impressive 84 per cent achieved A*-A in Economics, 83 per cent in Textile Design, 82 per cent in Physics and 80 per cent in Maths or Further Maths.

Headmistress Mrs Caroline Jordan said: “What a wonderful result for these girls! I have been impressed by their resilience, hard work and dedication and I am so pleased to see it paying off.

“Although the exam period is never without its stresses, I think the girls shared with me a sigh of relief on realising they would have a chance to prove what they have learned in the formal examination setting.

“I know their experience will have prepared them well for what comes next and I am excited to see what wonderful things they will achieve. Thanks too to our staff who have done a fantastic job ensuring they have had every opportunity to succeed and to perform at their best.

“Well done to all of them!” 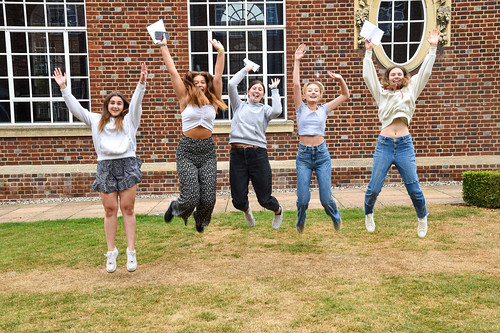